We were saddened to hear that Johnson Davis, who has been involved in our railway for many years, lately as our Trust Chair, passed away during Friday night, 11th October. There is an article about him on the first page of the Newsletter. 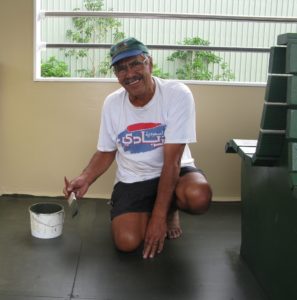 This is the Eulogy given on behalf of BOIVR by Frank Leadley:

Three days ago a mighty kauri fell in the forest. And the space it has left will be very hard to fill.

Johnson has been a pillar of the community in many ways – involved with the Kawakawa Business Association, Hundertwasser Trust, Te Papawai Community swimming pool at the College, Kawakawa Community Centre, and much more. He was a Kawakawa man through and through.

But his main passion has been with the BOIVR, and it is on behalf of the Railway that I wish to speak.

Way back in 2001 Johnson and I were involved in mounting a coup to bring the railway under one administration umbrella (which became the Bay of Islands Vintage Railway Trust) instead of the 2 groups that were at odds with each other and were hindering its restoration.  And Johnson has been fighting for that restoration ever since. In June 2012 he followed Alison Lemon as Trust Chairman and has been very successful in that position until a couple of months ago when failing health resulted in him handing over the Chair’s responsibilities to Sue Hamnett.

Johnson was honest, he was sincere, he was very determined, and he was a stickler for process. He did not suffer fools lightly, and he made sure he researched thoroughly and got his facts right before he entered into any argument or prepared for a meeting. He could be very annoying at times!

But he was also a very hands-on Trustee and Trust Chairman, and hardly a day went by that he wasn’t at the station, helping with the painting, cleaning, banking, taking photos, talking with visitors and making them welcome, and generally demonstrating his passion through what he did, and by the person he was. He was a “Do as I do” person, not “Do as I say.”

Even when the dreaded cancer took hold Johnson did not give in, determined to give as much as he possibly could to the cause. I never heard him complain that the task was getting too much for him.

He was never a behind-the-scenes Trustee or Chairman. He lived his passion, right out in the open for all to see. As the writer and editor of the Railway’s excellent Newsletters Johnson was able to give life to his dedication and to that of the other volunteers, and to the colossal amount of work that has been achieved.

He gave unstintingly of his time, without any thought of personal reward or recognition.

In ways too many to count Johnson demonstrated his passion, his energy, his enthusiasm, and his total commitment to getting the railway fully up and running. His catch cry was “Let’s get the train back to Opua.”

Sadly, we have not been able to get back to Opua yet. But I can promise you that we will. And when we do Johnson will look down and say, “About bloody time.”

Johnson – a driving force, who will be sorely missed. RIP 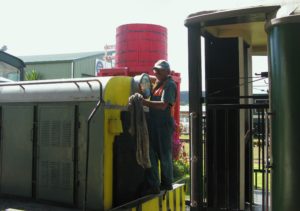 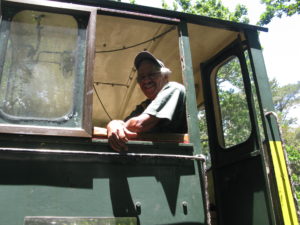